Home The Church Contact Us Articles
← Back to articles
What must I do to be saved? → 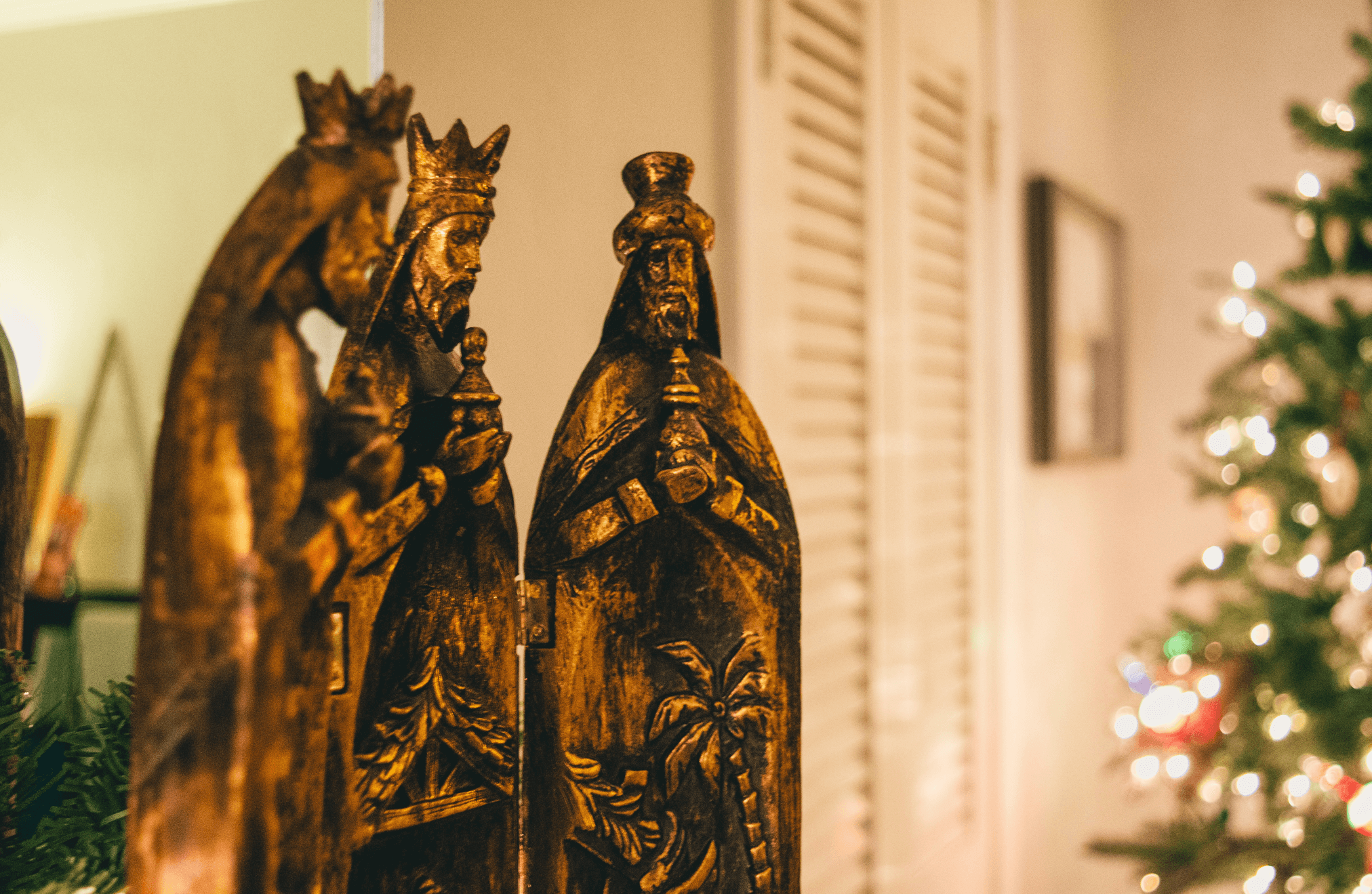 Many take for granted that Christmas is the birthday of our Lord and Savior, but the serious-minded Christian needs to consider what the Bible actually has to say about such a thing.

To begin, we simply do not know the exact date of Jesus’ birth, but from what the Bible does tell us, we can get pretty close, and we can know it was not a winter month. To the casual reader, little is revealed about the time of Jesus’ birth in the accounts of Matthew and Luke; there are no dates or seasons given. A closer look, however, reveals that Luke, a well-regarded historian, actually gives us many clues to the general time of Jesus’ birth in his detailed, orderly narrative of events. Once these clues are laid on the table, a full, accurate picture emerges.

Luke 2:1-5 tells of the census of Quirinius that required Joseph and Mary to travel from their home in Galilee to the city of David, Bethlehem, because Joseph was of the lineage of David. This census would most likely have taken place after the fall harvest when people were more able to make the trip. In Judea, it was also customary for tax collecting to occur around this time since that is when most of a farmer’s income was realized.

In Luke 2:7, we read that Jesus was laid in a manger because the inns were all full. From this, we can conclude that the travelers from around the world had started arriving in Jerusalem and the surrounding area and that the fall festival season had already begun. This, in addition to the census, was the reason for there being no place to stay. In the month of December, there would not have been a similar influx of pilgrims.

We can also know Jesus was not born in a winter month because Luke 2:8 says that the angels visited the shepherds while they were still with their flocks out in the fields. It was a custom among the Jews to send out their sheep to the wilderness around the time of the Passover (spring) and keep them out in the open country during the whole of the summer. During this time, the shepherds watched them night and day. As the weather turned colder and the rainy season began, around the modern calendar months of October and November, the sheep were brought home and kept in centrally located pens or corrals, especially at night (Clarke’s Commentary, vol. V, p. 370).

This historical fact alone tells us that our Lord was not born on the 25th of December, nor could He have been born later than September, since the flocks were still in the fields at night. Why else would Luke have mentioned such a detail if it were not to convey for us a time reference?

We find further clues to the time of Jesus’ birth in Luke 1:5-38, which gives the account of Zacharias, a priest, and the time that he served in the Temple right before the birth of his son, John (the baptizer). Luke starts with the story of Zacharias and his wife Elizabeth, who had no children, and continues with a chronology of a very specific series of events. Concerning a time reference, here are the important points to note:

Let us first consider the course of Abijah mentioned in Luke 1:5. According to 1 Chronicles chapter 24, the priests (“sons of Aaron”, v. 1) were divided “according to the schedule of their service” (v. 3) into courses, or divisions or shifts, to serve in the Temple throughout the year. Verse 4 tells us that “among the sons of Eleazar were sixteen heads of their fathers’ houses, and eight heads of their fathers’ houses among the sons of Ithamar,” for a total of 24 courses. These courses were “divided by lot... for there were officials of the sanctuary and officials of the house of God” (v. 5). Beginning with the first day of the first month of the Hebrew calendar (Nisan 1), the courses rotated throughout the year, each serving in the Temple for one week. According to 1 Chronicles 24:10, the course during which Zacharias worked, the course of Abijah, was the eighth shift.

This is what the first-century Jewish historian, Josephus, wrote about the priestly courses, which were strictly followed until the Romans destroyed the Temple in 70 AD:

He [David] divided them also into courses: and when he had separated the priests from them, he found of these priests twenty-four courses, sixteen of the house of Eleazar and eight of that of Ithamar; and he ordained that one course should minister to God [during] eight days, from [noon] Sabbath to [noon on the following] Sabbath. And thus were the courses distributed by lot, in the presence of David, and Zadok and Abiathar the high priest, and of all the rulers: and that course which came up first was written down as the first, and accordingly the second, and so on to the twenty-fourth; and this partition hath remained to this day” (Antiquities of the Jews, 7:14-7).

The Hebrew calendar, which is a lunar-based calendar, usually has 51 weeks. Given that each course served for a week and there were 24 courses, each course would have been required to serve twice a year. This accounts for 48 weeks of the year and leaves three extra weeks. According to the Talmud, all 24 courses were required to work during the three Jewish holy day seasons, Passover, Pentecost and Tabernacles, making up those three extra weeks.

Our modern day calendar does not follow the ancient Hebrew calendar, but if we were to “overlay” today’s calendar with the calendar of Zacharias’ time, we would be able to find a close approximation for the true birthday of Christ. Nisan 1, the first day of the first month of the Hebrew calendar, roughly corresponds to March or April of our current calendar. Given that Zacharias’ shift was the eighth, he would have first served in the Temple during May or June and then again six months later in November or December. As we noted earlier, Elizabeth conceived soon after Zacharias returned home from Jerusalem. Using this as a starting point, overlaying the calendars would look something like this: 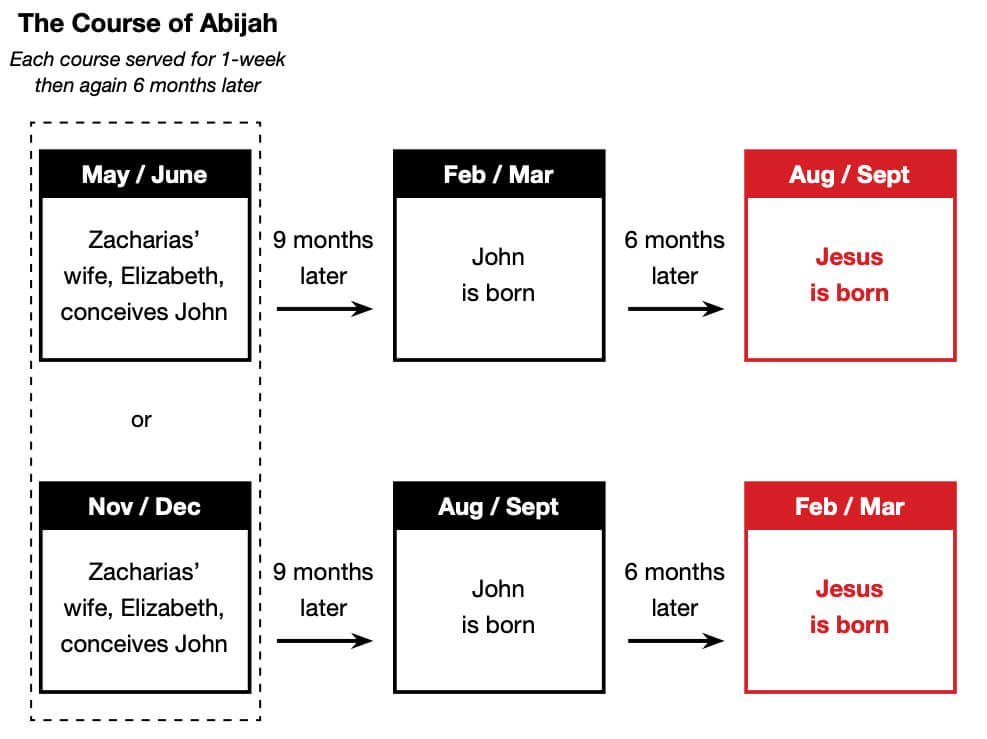 Put all this together, and we have John being born in the February/March time frame or August/ September time frame. Then, six months later, Jesus was born around either August/September or February/March. The first timeline is most likely since the second one put Jesus’ birth too close to the Passover (before the shepherds would be out in the fields with their herds). This calendar is an estimate based on the best information that we have available to us today. Calendars have changed slightly through the years, but based on all the Biblical evidence, we can know for certain that Jesus was not born in December, or even a winter month.

If we go back to the Bible and read the account of events that closely followed the birth of Christ, we will find inaccuracies in several other details that most people falsely take for granted. Please read Matthew 2:1-17 and consider the following:

Given that there is no Biblical evidence to support Christmas being Jesus’ birthday, one might wonder where Christmas came from. The celebration of Christmas as the “birthday of Christ” started as a Roman Catholic attempt to convert Roman pagans over to Catholicism in the 4th century. They took a very debaucherous pagan holiday called “Saturn-alia” honoring Saturn, the God of Agriculture, and proclaimed it to be “Christ’s birthday.” Eventually, the day would become known by the Catholic “Mass” that took place, hence the name: “Christ-Mass.”

Do we have authority to celebrate Christmas in any way today? Since there is no mention of Christ’s birthday in the New Testament (as a “holy day” of celebration), we have no Biblical authority to observe such a day in a religious way. Does that mean it is wrong to observe Christmas at all?

I know of atheists, and even some Jews, who celebrate Christmas as a national, secular holiday. Can the faithful Christian celebrate this day as a secular, national holiday? The answer is yes, as long as we keep all religious elements out.

If we can understand how we may call these days of the week by their traditional names without honoring the false gods they were originally named to honor, we should be able to know what does and does not indicate to the general public observance of Christmas as Christ’s birthday versus our observance of it as just a national holiday.

For the faithful follower of New Testament Christianity, there is but one day on our calendar with religious significance — the first day of the week (Sunday). 1 Corinthians 11:23-26 instructs that we partake of the Lord’s Supper each Sunday to “remember His death” (not His birth) until He comes again to judge the world. Beyond that, the observance of days in a religious sense is condemned in the New Testament, as Paul states in Galatians 4:10-11.